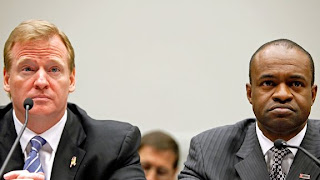 The NFL owners and the NFL Players Association continued their talks today in New York in hopes of ending the lockout, however there has been a great deal of optimism surrounding these discussions. Reports indicate that the lawyers on both sides are meeting to discuss the language of a potential agreement, which indicates the lockout could end soon.

While there is still a lot of work to be done, sources believe that an agreement is within reach, however this would likely not be completed until next week at the earliest. Today marks the 112 day of the lockout.

In similar news, the NFL hall of fame announced that it still plans on hosting the league's first preseason game on August 7 between the Bears and Rams. To make the August 7 date, both teams would likely need to begin training camp sometime in the next two weeks. Despite the small window of time, both the Bears and Rams have told the hall of fame they plan on participating.
at 12:14 PM