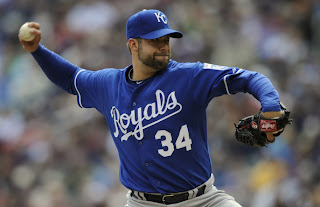 Our Long, Local Nightmare is over. Kyle Davies was released today in order to make room for Salvador Perez. Perez is thought to be Kansas City's brightest catching prospect. Matt Treanor is unavailable due to injury, and Brayan Pena is on paternity leave. That left the Royals short a catcher on their roster, hastening Davies release.

Davies, with his 1-9 record and 6.75 ERA for the season will not be missed by Royals fans. Now, calling him the worst pitcher ever is probably not fair, but he has been horrendous ever since coming to Kansas City in 2007. All the while, Royals management has sung his praises hoping for a turnaround that never came. Who knows, maybe another team will pick him up and rejuvenate his career. God knows this has happened to former Royals in the past.