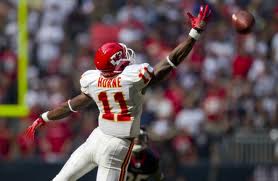 Fresh off a blowout loss to the Seattle Seahawks, the Chiefs were forced to make some roster cuts. Kansas City ended up cutting 14 players to reach the league-mandated number of 75 for this point in time.

Most of the players cut are first or second-year players that have not made much of an impact on the team. Chiefs fans will likely recognize wide receiver Jeremy Horne and fullback Shane Bannon, who have seen playing time in the past. Bannon’s release is a little surprising, given that the team has been very thin at fullback during the preseason. Many expected him to at least make it to the 53 man roster cut. Kansas City fans may also remember Tim Biere, who was a standout tight end at the University of Kansas.

The full list of the players Kansas City cut:

The team will make its final cuts on Friday, after concluding its preseason schedule with an away game at Green Bay. Head coach Romeo Crennel has yet to comment on the roster cuts, but injuries may play a factor in regards to which players the team keeps. The Chiefs have been hit hard in the secondary, as cornerback Brandon Flowers and safety Kendrick Lewis continue to nurse nagging injuries and may miss some time early in the regular season. The team signed a several undrafted free agent defensive backs this offseason, and these players have to feel better about their chance to make the final 53 man roster.