KU Moves To No.1 In Coaches' Poll 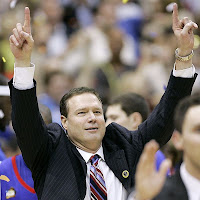 After an impressive week in which they defeated Kansas State and Oklahoma and pushed their winning streak to a nation-leading 17 games, the Kansas Jayhawks have moved up to No. 1 in the coaches’ poll. KU is at No. 2 in the Associated Press poll behind Michigan. In both polls, Indiana is ranked third, followed by Florida and Duke.

While the Jayhawks have had several close calls, the team hasn’t dropped a game since losing a close contest to Michigan State early in the season. Last week, KU defeated No. 11 Kansas State on the road and Oklahoma at home. K-State was tied for first with KU when the two teams met, while Oklahoma was tied for second place on Saturday. The wins not only moved the Jayhawks up in the polls, but set KU up with a favorable run towards a ninth straight Big 12 title.

The Jayhawks will be forced to defend their new ranking immediately, as the team travels to Morgantown to face West Virginia tonight. The Mountaineers are 9-10 this season and 2-4 in Big 12 play, and lost at Oklahoma State on Saturday 80-66.