There is only one Kansas City area team left standing after the first round of the NCAA tournament. The Kansas Jayhawks survived a scare from Western Kentucky in the first round, advancing to face North Carolina on Sunday. Kansas State was not as fortunate, falling to 13-seeded La Salle.

(1)Kansas 64   (16)Western Kentucky 57
The Jayhawks looked flat to start the game, and struggled to score during the first half. The Jayhawks picked things up a bit in the second half, eventually building a double digit lead late. However, the Hilltoppers stormed back, capitalizing on several turnovers by the Jayhawks and knocking down some threes. KU eventually sealed the game at the free throw line. 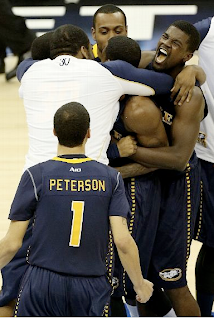 The Jayhawks’ guard play was extremely poor all game. Naadir Tharpe turned the ball over often while taking bad shots, while Ben McLemore disappeared. Jeff Withey had a big game for Kansas, and Perry Ellis and Keving Young also added some much needed scoring. The Jayhawks’ guard play will have to improve if they want to make the Sweet 16 for the third straight year.

(13) La Salle 63   (4) Kansas State 61
The Explorers jumped all over the Wildcats early, building a 44-26 halftime lead. It looked like K-State was finished, however they had a massive comeback in the second half and eventually took a one-point lead. Kansas State had two chances to win the game at the end but the Wildcats failed to score on their last two possessions.

K-State exceeded most preseason expectations, however three losses to KU and a first-round NCAA Tournament exit have to have Wildcat fans feeling a bit disappointed.