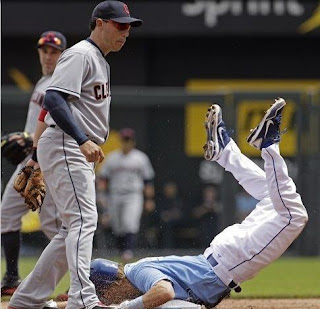 After surviving a tough road trip out west, the Royals returned home to face one of the worst teams in the league and hopefully gain some momentum in its first division matchup of the season. Unfortunately, everything that could go wrong for Kansas City did, and the Royals were swept by the Cleveland Indians.

After an impressive start in his first appearance of the season, Luke Hochevar got absolutely rocked by the Indians in the Royals' home opener. Hochevar allowed seven runs in the first inning alone, and Kansas City fell to Cleveland 8-3. In the second game of the series, Kansas City fell behind 9-2 before eventually tying the game at 9-9 after a furious comeback. The Royals couldn’t keep the momentum going, and Cleveland prevailed in extra innings, 11-9.

It appeared that the Royals were going to salvage game three of the series early, when Kansas City took a 3-0 lead off of the struggling (and recently suspended) Ubaldo Jimenez. Cleveland erased that deficit in a hurry, scoring six runs in the third inning and cruising to a 13-7 victory. That loss dropped the Royals to 3-6 on the season, and Kansas City current sits in fourth place in the AL Central standings.

The entire series was an ugly one for Kansas City. After a fantastic start to the season, the Royals’ starting pitching was terrible all weekend. The Indians officially have Kansas City’s number, and the Royals will have to find a way to start winning more games against division opponents.

Kansas City starts another AL Central series today against the Detroit Tigers. Danny Duffy (1-0) will get the start for the Royals, and will face one of the best pitchers in the game in Detroit’s Justin Verlander (0-1).