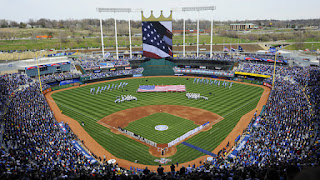 The Royals 2012 home opener is just hours away! After starting the season off with a road trip out west, Kansas City will play its first home game this afternoon at 3:10 p.m. The Royals (3-3) will take on the struggling Cleveland Indians (1-4).

For the second year in a row, Luke Hochevar (1-0) will get the start in Kansas City’s home opener. Hochevar looked impressive in his first outing of the season, allowing only two runs in 6 innings pitched against the Angels. While Cleveland has looked terrible so far this season, the Royals will face one of the league’s better pitchers in Derek Lowe. In his only start this season, Lowe threw seven scoreless innings against Toronto to lead the Indians to their only win of the season. The pitching matchup suggests that this could be a very low scoring affair; however Hochevar has struggled against Cleveland in the past. In 2011, the Royals’ Ace went 1-2 against the Indians with a 5.31 ERA. Derek Lowe has struggled against the Royals in his career, with a 5.72 ERA in games played in Kansas City.

After a disappointing end to its series against the A’s, Kansas City has a great opportunity to take this series and build some momentum. The Royals’ next three series are at home, and several AL Central matchups loom in the near future as well. A hot start could catapult this team into playoff contention, and this year, the Royals seem capable of living up to their early hype.

This will be the first home opener for both Eric Hosmer and Mike Moustakas, as both were called up from the minor leagues during last season. The Indians went 12-6 against the Royals last season, and won 4 out of the 5 games played in Kansas City.

7 runs in the 1st inning, Ouch! That was just terrible for all of those Royals fans out there. At least they had good weather.

Hosmer just lost control right off the bat. He thought he was still throwing warm up pitches in the bull pen.